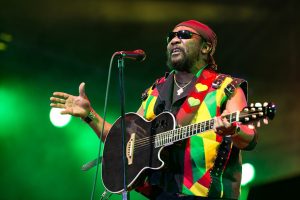 Frederick “Toots” Hibbert, lead singer and songwriter of Toots and the Maytals and one of reggae’s foundational figures, died Friday at the University hospital in Kingston. He was 77.

The cause of death was not officially revealed, but he had reportedly tested positive for coronavirus and had spent the last two weeks in intensive care.

Hibbert’s soulful, electrifying performances thrilled live music lovers for more than 50 years and brought a distinctive Jamaican expression to international audiences. His 1968 song “Do The Reggay” gave a name to Jamaica’s signature beat, but his artistry cross boundaries globally.

Earlier this year, a reformed Toots & the Maytals entered the Festival Popular Song Contest with the song “Rise Up”, having previously won on three occasions.