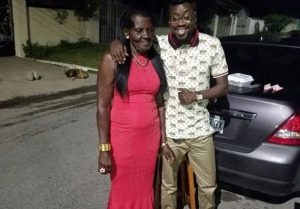 This after being hospitalised at the University Hospital of the West Indies, following a series of strokes back in July. However, she was however later released.

At the time of her hospitalisation, the entertainer made the revelation in a 10-minute-long social media video, where he was moved to tears after disclosing how the development has
left him in a distraught state.

The revelation of her death was made by Dancehall Queen Carlene.

A number of social media users including entertainers have been sending prayers and condolences to the entertainer and his family.