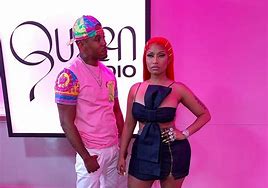 Nikki Minaj husband Kenneth Petty allegedly failed to register as a sex offender and was arrested in California.
This came after Petty moved from New York to Los Angeles.

According to officials, Petty handed himself in Wednesday march 4.He then appeared in court moments after and pleaded not guilty. He was later released on a $100,000 bond.
Kenneth now has a curfew and is said to wear an ankle monitor. He is restricted from using drugs and will be at his other hearing March 23.
Petty was convicted of attempted rape in April 1995 and was said to have served four years in prison.
2006 he was back in prison for almost a year after pleading guilty to first-degree manslaughter.
Nikki Minaj and Petty went to high school together but officially got married last October, a year after they dated.