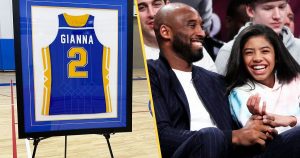 Gianna, who died in a helicopter crash alongside her father, Los Angeles Lakers legend Kobe Bryant, and seven other people on January 26, was described as the “heart and soul” of Harbor Day School’s basketball team.

During the ceremony, which included emotional speeches from her teachers, fellow students and coaches, it was announced the framed number two jersey with Gianna’s name on the back would be displayed on the wall of the school gym to ‘inspire’ others.