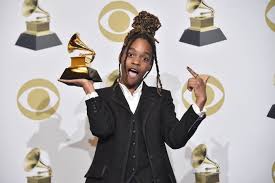 Well in-case you have not heard, Koffee won a Grammy last evening at the 62nd annual Grammy awards held at the staples center in Los Angeles California.

The 19 year old won the award for the best reggae album for her EP entitled “Rapture”. In doing so, Koffee has became the youngest Jamaican to win a Grammy and also the first female to win a reggae Grammy creating history.

Prime Minister Andrew Holness posted a message on social media to congratulate Koffee, saying….“congratulations and toast to @originalkoffee on winning the Grammy for the best reggae album, no Ls only Ws, Jamaica is immensely proud of your historic achievement”.

Meanwhile, Leader of the opposition Dr. Peter Phillips also took to his Instagram to post a message for Koffee, he wrote, “congratulations to Koffee on winning the Grammy for best reggae album- Rapture. We are very proud of you and this accomplishment, gratitude is really a must”.

AND…Entertainment Minister Olivia “Babsy’ Grange said, “Koffee is an outstanding ambassador of the reggae music of Jamaica, despite her young age, and thoroughly deserving of the reggae Grammy for her well produced album Rapture. Koffee’s achievement is an inspiration to us all, especially emerging artistes and women artistes who continue to beat against the glass ceiling as they build lasting careers. On behalf of the entire Jamaica, I send our warmest congratulations to Koffee- an outstanding, gifted, talented daughter of the soil, and proud product of the central St. Catherine”.

Take a listen to Koffee’s acceptance speech (below)