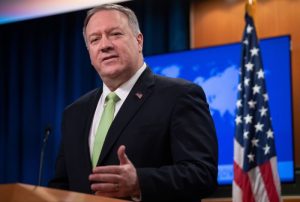 United States Secretary of State Michael Pompeo is expected to arrive in the island today, ahead of talks with Prime Minister Andrew Holness tomorrow (Wed).

This amid criticism from the Opposition and some Caribbean Leaders.

Mr. Pompeo will meet with Prime Minister Holness, conduct a multilateral round table discussion with Caribbean leaders and deliver remarks on US Caribbean relations.

The Secretary of State will land at the Norman Manley International Airport in Kingston at about 6 o’ clock this evening.

Pompeo’s visit comes amid controversy over reports that the Secretary of State will be holding discussions with Caribbean leaders, but there is no clear indication as to which other Caribbean leaders in addition to Holness will be at the meeting.

Already, Chairman of the Caribbean Community CARICOM and Barbados’ Prime Minister Mia Mottley, has noted the lack of a formal invitation to the meeting and said that she will not be sending a representative and reports emerged yesterday that Prime Minister of Trinidad and Tobago Dr. Keith Rowley, stated his agreement with Mottley.