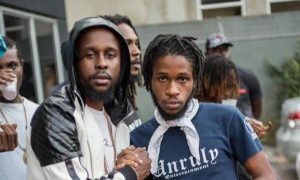 Recording artiste Popcaan has publicly expressed his support for entertainer Quada, who was charged with murder and arson yesterday.

The Unruly Boss, who signed Quada to his Unruly Entertainment label in 2018, took to Instagram to encourage the 23-year-old Dancehall Artiste to stay strong.

Detectives at the Constant Spring Police Station charged Quada after a question and answer session yesterday.

According to a report from the police, Quada was charged for the murder of 30-year-old Miguel Williams in Sterling Castle Heights, St. Andrew on April 17 last year.

Reports are that Williams was allegedly beaten, set ablaze and his house torched by residents, who accused him of having knowledge of the rape and murder of an 8 year old student in the community.

The Dancehall Artiste joins fellow accused, 30-year-old Andrew Breakcliffe, who was also charged with murder and Arson in December 2019.