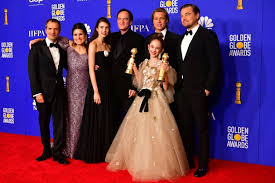 Winners included Ellen DeGeneres, who received the Carol Burnett Award for excellence in television, while Tom Hanks accepted the Cecil B. DeMille award for lifetime achievement.

Brad Pitt won the award for best supporting actor in, “Once Upon A Time… In Hollywood”, with Laura Dern winning Best Supporting Actress for “marriage story”.