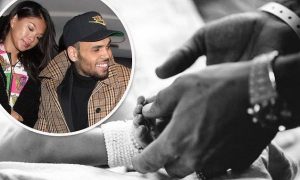 Chris Brown has finally given the world its first glimpse of his newborn son.

On Wednesday, Breezy took to Instagram where he shared a black-and-white picture of his hands holding his son’s feet. Although the post doesn’t show the baby’s face, Brown did reveal his name, Aeko Catori Brown, with the caption.

Brown and his ex-girlfriend Ammika Harris welcomed their child into the world last month. Brown announced his son’s birth through an Instagram post.