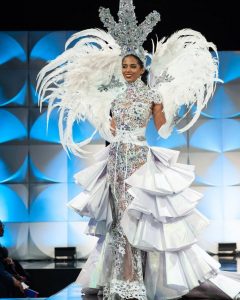 The Miss Universe Jamaica Organization has defended the ‘Annie Palmer’ theme choice for this year’s national costume at the Miss Universe pageant, saying it was intended to lead to “teachable moments” for young people.

The organisation’s response comes after social media users yesterday criticised the ‘Annie Palmer- Legend of Rose Hall’ costume, which was used to represent the country during the national costume competition of the Miss Universe pageant.

Social media users argued that the costume was in bad taste as it glorified a negative aspect of the country’s history.

The organisation also urged the nation to support Iana Tickle-Garcia, who it said has been “viciously attacked on social media for wearing the costume, while representing the country abroad.