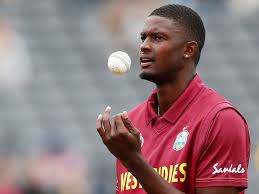 West Indies Captain Jason Holder has moved up one spot in the latest edition of the MRF Tyres ICC Rankings for test bowlers, This follows his side’s 5-w2icket haul in the one off test victory against Afghanistan

The 29 year old who also consolidated his position as the number one ranked test all-rounder, now trails only Australia’s Pat Cummins and Kagisa Rabada among bowlers.

Kemar Roach 11 and Shannon Gabriel 19 are the next best placed West Indians on the list while off-spinner Rakim Cornwall who took 10 wickets against Afghanistan has broken into the top 50 and occupies the 47th spot.