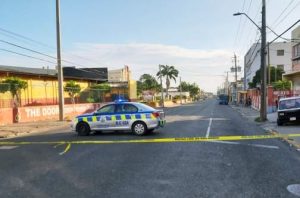 A man was shot on Slipe Road in Kingston yesterday afternoon, just one hour after he was released from prison after 3 years.

23-year-old Dishane Dixon spent three years in lock-up at the Horizon Adult Remand Centre on a shooting charge, and had just taken up his bail at the Supreme Court at 2:30pm.

However, while on his way home with his mother and another individual, he was shot four times in the head.

Dixon’s mother, who was driving the motor vehicle in which he was travelling, said they had just left the Supreme Court on King Street in downtown Kingston, when he was shot.