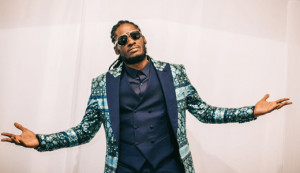 The running debate for the past two days on Twitter has been whether the 4thGenna boss Aidonia has reached the status of legendary in the realm of Dancehall music.
This all started from users speaking on who they believe were legends in music, as is the running discussion almost every week on Twitter.
Reggae singer Protoje had a few words of input on the topic, stating that Vybz Kartel is a genre to himself and should never be compared to anyone else. Diggi added that Popcaan is a living icon and Alkaline is a different type of dope.
Aidonia then made a tweet, stating that persons cannot deny the fact that he is a legend to which, Protoje agreed. However, some users are of the notion that Aidonia has not done enough to claim the title of a legend in dancehall. This has since sparked an ongoing debate.
Many users argue that Aidonia changed the musical landscape with his speedy lyrics in Dancehall, which paved the way for a lot of these local artistes to use that style which is now acceptable in dancehall. Some argued that Aidonia’s catalog of hits speaks for themselves where quality outweighs quantity while others say this lack of quantity is what devoid’s legendary status.

But the questions on the table are, what defines a legend in Dancehall and has Aidonia attained those heights.