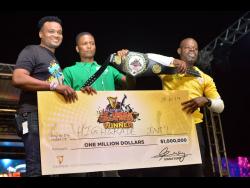 This is the second time that Shacka has won the competition, having done so in 2015, with SK International.

High-Grade International defeated sounds Fire Biggs and the Real Money Sound to win the 2019 Guinness Sounds of Greatness final at the Red Stripe Oval on Friday.

Following the win, shacka says a new event will be launched in the Olympic Gardens community called “Early Mondays.