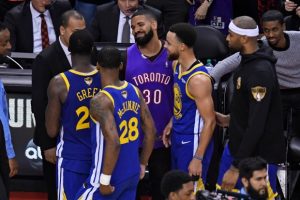 Drake kept his hands off Raptors coach Nick Nurse, but the rapper did his best to troll the Warriors during Game 1 of the NBA Finals.

He even shared a tense moment at the end of the game with Draymond Green, as the two men squared off, basically nose to nose, as the Warriors walked off the court following Toronto’s convincing 118-109 win.

After the final buzzer, the camera caught Drake and Green in a heated verbal exchange that lasted a few moments before the Warriors forward made his exit.

It’s unclear what the two men actually said to each other, especially in the case of Green, who mostly had his back to the camera.

But it’s being reported that Drake called him “trash.”

Green was dismissive when asked by a reporter about his “scuffle” with Drake.

“We talked,” Green added. “We barked a little bit but I wouldn’t necessarily consider that a scuffle.”

Regardless of what anyone calls it, the exchange definitely caught the attention of the TV announcers.

On Thursday night, the rapper made his allegiance known early and often, showing up to to the first-ever Finals game in Toronto wearing a replica of Steph Curry’s dad Dell’s old No. 30 Raptors jersey.

Despite being good friends with No. 30 on the Warriors, Drake made sure he didn’t show any love toward Curry or his teammate, Kevin Durant, by covering up his tattoos of the two Warriors with a wristband.

Curry actually initiated one playful exchange with the rapper by walking over to him during a timeout.

But, Drake’s mean mug let all know he wasn’t playing around on this night.