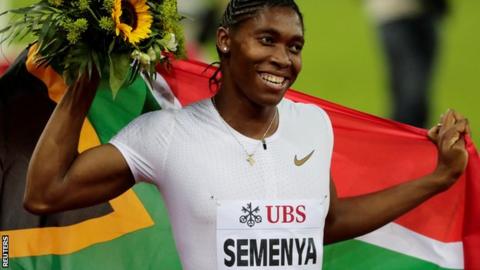 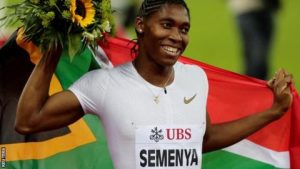 Fans urged Caster Semenya not to quit athletics after she posted a cryptic tweet following the loss of her appeal against regulations restricting testosterone levels in female runners.

Semenya will have to take medication to reduce her testosterone level if she is to continue competing at 800m.

The 28 year old Olympic champion, is confirmed for that distance in the Diamond League season opener in Doha on Friday.

Semenya’s tweet included a quote which referred to knowing when to walk away.

One person replied to Semenya’s tweet saying “never give up” while another urged her to “fight until the end”.

But Semenya posted another tweet shortly afterwards that read: “That’s me and will always be. I’m finished.”

However, Athletics South Africa president Aleck Skhosana appeared to play down suggestions Semenya could quit by describing her as “an outstanding athlete who has a continuous hunger for great results”.

On Thursday, Lord Coe, president of the IAAF, welcomed the Court of Arbitration’s decision to reject Semenya’s challenge against new rules from athletics’ governing body.

Speaking in a news conference for Friday’s Diamond League meeting, he said: “It’s pretty straightforward. Athletics has two classifications, it has age and gender.

“We are fiercely protective of both and I am really grateful the court of arbitration has upheld that principle.”

Coe, who answered two questions on the subject before refusing to answer more and switching to the Diamond League, said there would be no delay in implementing the new regulations, despite Cas saying it had “serious concerns as to the future practical application” of them.

It means Semenya – and other athletes with differences of sexual development (DSD) – must either take medication in order to compete in track events from 400m to the mile, or change to another distance.