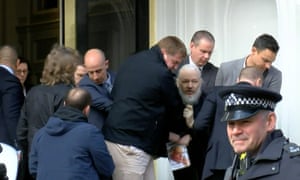 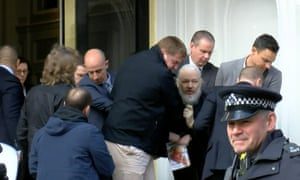 Wikileaks co-founder Julian Assange has been arrested at the Ecuadorian embassy in London.

Mr Assange took refuge in the embassy seven years ago to avoid extradition to Sweden over a sexual assault case that has since been dropped.

The Met Police said he was arrested for failing to surrender to the court and following a US extradition request.

Ecuador’s president said it withdrew his asylum after repeated violations of international conventions.

But Wikileaks tweeted that Ecuador had acted illegally in terminating Mr Assange’s political asylum “in violation of international law”.

Mr Assange, an Australian national, set up Wikileaks in 2006 with the aim of obtaining and publishing confidential documents and images. The organisation hit the headlines four years later when it released footage of US soldiers killing civilians from a helicopter in Iraq.

Former US intelligence analyst Chelsea Manning was arrested in 2010 for disclosing more than 700,000 confidential documents, videos and diplomatic cables to the anti-secrecy website.

She said she only did so to spark debates about foreign policy, but US officials said the leak put lives at risk.