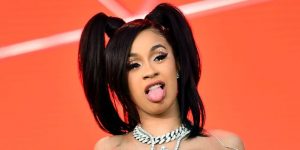 Cardi B leads all nominees at the 2019 Billboard Music Awards.

The rapper is nominated 21 times in 18 categories, just missing the record for most nominations set by Drake and The Chainsmokers, who each had 22 in 2017.

Following Cardi B, Drake and Post Malone each have 17 nominations.

Kelly Clarkson hosts the 2019 Billboard Music Awards from the MGM Garden Arena in Las Vegas on May 1.