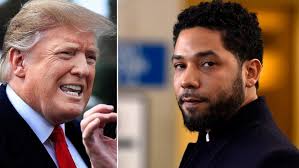 Donald Trump has called the Jussie Smollett case “outrageous” and an “embarrassment to the nation”.

All charges against the Empire star were dropped on Tuesday – he had been accused of arranging a fake racist and homophobic attack on himself.

The US president says the FBI and the Department of Justice (DOJ) will now be investigating the case.

Separately, Jussie’s lawyer has accused authorities of “continuing their campaign” against the actor.

The mayor of Chicago – the city where the alleged attack happened – said dropping the charges was “a whitewash of justice”.

Jussie’s lawyer says “the case is closed” and “no public official has the right to violate” her client’s rights.