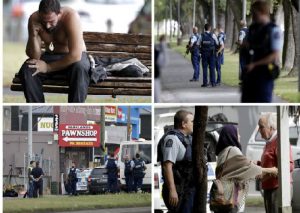 Forty-nine people have been killed and at least 20 wounded in shootings at two mosques in Christchurch, New Zealand, in the nation’s deadliest attack.

Prime Minister Jacinda Ardern described it as a terrorist attack and one of New Zealand’s “darkest days”.

A gunman identifying himself as an Australian live-streamed the rampage at Al Noor mosque to Facebook. He had espoused racist, anti-immigrant views.

Police say a man in his late 20s has been arrested and charged with murder.

Two other men and one woman were also detained. One was released later.

No names have been made public. Firearms and explosive devices were reportedly recovered.

US SECRETARY OF STATE TO HOLD TALKS WITH PM TODAY