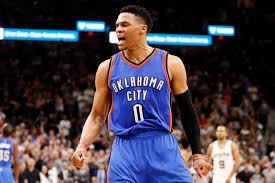 He tied Wilt Chamberlain’s run of nine triple-doubles in a row, set in 1968, on Sunday against Houston Rockets.

The 30-year-old point guard broke the record in Thunders’ 120-111 win over Portland Trail Blazers with 21 points, 14 rebounds and 11 assists.